Green Ridge was a local authority presumption new school which was driven by the demand for school places locally within Aylesbury.  The Berryfields estate had been under construction since 2011, and with one primary and a secondary school on the estate already, by 2016, there was a clear need for additional school places to meet the huge demands of families moving into the area.

REAch2 multi-academy trust submitted an application to Buckinghamshire County council, to be appointed as the Academy sponsor for the new school.  After completing a two-stage application process, REAch2 were successfully appointed as the Academy sponsor in 2016.  The Trust would operate Green Ridge Primary Academy under a 125-year lease with Buckinghamshire County Council.  It was agreed that the school would initially open as a 2-form entry school (accommodating 60 children per year group) but would be designed with capacity to expand to 3-forms of entry via an extension to the North-East wing.

Two of REAch2’s central team, Gill Ellyard (then Regional Director of the North Central schools) and Lee Francis (Head of Projects) visited the proposed site of the school and owing to the very green landscape at that point, and the vast ridge which the school would stand upon, the school was aptly named ‘Green Ridge Primary Academy’.

In November 2016, Aaron Wanford was appointed as the Headteacher designate of the new school, with a view that it would open fully in September 2017.  Aaron worked primarily with Gill Ellyard and Calum Marriot (Project Manager) in the first few months to attend building and planning meetings and begin the organisation of the school with resources and its curriculum. 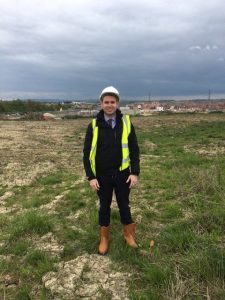 Green Ridge was designed to meet and be responsive to the needs of the local community it serves.  With two other primary schools close by, it was key that Green Ridge worked collaboratively alongside them, but at the same time, remains distinctive.

During June and July 2017, Aaron visited local nursery settings to meet the children that would be starting school in the September.  He was also able to meet with some of the parents/carers and completed parent induction sessions which were held in the local community centre in Buckingham Park.

During the summer of 2017, a huge modular temporary building was erected on the current car park of the site which would house the school for the first year of operation, whilst the permanent building was constructed.  The temporary building housed just four classrooms, a hall and some offices.  Initially in 2017-2018 academic year, Green Ridge had just two Reception classrooms with a capacity of up to 60 children, and a single class of Year One and Year Two (with a total of 30 children). 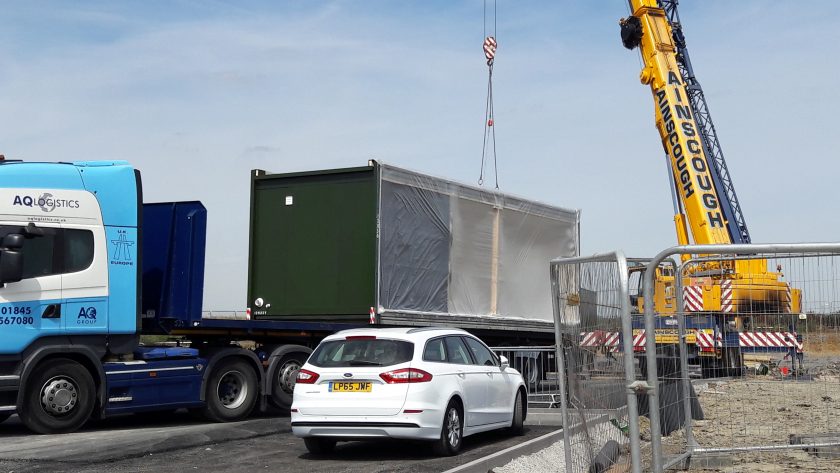 On the 11th September 2017, the school opened its doors for the first time, with just 80 pupils.  In May 2018, with the mixed Year One and Year Two class now full, it was decided with the local authority to split the class back into its respective single year groups, and so more places were then available in Year One and Year Two at the end of the year.

Over the summer holidays of 2018, the school de-camped its entire contents into the new building, and all of the new furniture and equipment arrived in the main building.  The staff spent the entire six-week holidays preparing the building for opening, and then on 10th September 2018, Green Ridge opened its doors officially again in the new building.

When Green Ridge moved to its permanent building in September 2018, it opened its Nursery and pre-school, (Little Ridges) as well as an additional 60 children for the Reception intake.  The Nursery had two rooms – a 2/3-year-old room, and a 3/4-year-old room.   Then, each year since, the school has taken an additional 60 children into Reception, and other year groups has simply moved up.

On the 18th March 2019, the permanent building was ‘officially’ opened in a prestigious ceremony.  The Lord Lieutenant Sir Henry Aubrey Fletcher came to open the school, and was joined by Cathie Paine, Deputy CEO of REAch2 and other dignitaries from the Buckinghamshire Council and REAch2.  The whole-school attended a special assembly, and a time capsule was buried in the school grounds containing a range of objects to be opened in a few decades – including money, a toothbrush and a Green Ridge opening tea towel! A tree planted at the front of the building to mirror the new life and chapter of starting Green Ridge.  All visitors received bespoke Green Ridge cupcakes and refreshments and were taken on a tour of the building. 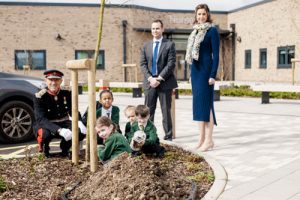 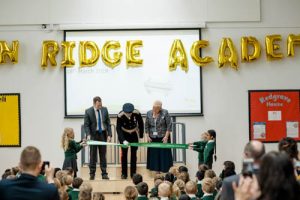 Over the years, staffing has considerably expanded to meet the growing number of pupils and their needs.  The school currently has over 50 members of staff, and over 400 pupils.  Within the next two years, Green Ridge will be ‘complete’ with 420 pupils from Reception to Year Six, as well as approximately 40 children in the Nursery.

Our academy rightly prides itself on the high expectations it places on the academic achievements and behaviour of all children, whatever their need, as well as a broad, diverse and engaging creative curriculum which will underpin all that we do.  We strive for the best outcomes for our children and want to give them every opportunity to succeed, whatever their barriers may be.  Green Ridge will be an academy where every child is respected and treated as an individual, with no limits placed on their learning – just opportunities to continually improve with a growth Mindset approach.  We will not ‘label’ children or group them by perceived ‘ability’; we will instead give all children equal opportunities to challenge themselves through the range of tasks and activities presented to them – empowering children to take ownership and responsibility for their own learning.

During 2020-2021, like everyone and all schools across the country, Green Ridge had to close due to the Coronavirus pandemic between March 2020 and June 2020.  Only children from ‘Key Worker’ families were allowed to attend school.  The school re-opened to Early Years and Year One in June 2020 until the end of the academic year, and fully re-opened to all pupils in September 2021.  Due to the continued threat of Coronavirus and the number of cases locally, the school operated much remote learning during the academic year 2020/2021 as classes, bubbles and groups were required to isolate.  Arrangements regularly changed during this academic year as new measures were brought in to keep everybody as safe as possible.  This meant that many of the school’s normal events (such as productions, assemblies and parent meetings) were unable to happen in person.  From September 2021, the school returned back to ‘normal’ operating procedures with the reduced threat of Coronavirus. 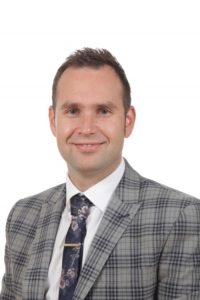 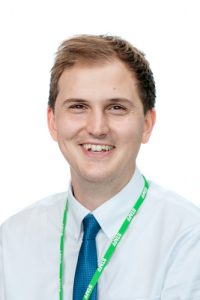